If you’re in need of a bail bondsman in Boone, IA at this time, you should only rely on the best. For almost 40 years, A Bail Co. Bill & Travis Rothmeyer has served as the leading 24-hour bonding company in all of Boone County, Iowa. Whether you’re in need of cash bail bonds for yourself or surety bonds for a loved one, we’ll be there to set you up with the most affordable bail bonds around. Can’t make it to us? Let us come to you with our mobile bail bonds service following an arrest.

You don’t want to be locked up behind bars any longer than you have to be when arrested for theft, drunk driving, or another charge. A Bail Co. Bill & Travis Rothmeyer will make sure your freedom is protected by sending a licensed bondsman to post your bail, allowing you to go home and wait before your legal proceedings truly begin. Since we were first founded in 1982, we’ve helped those all across Boone County and continue to work hard to provide people all across Iowa with the bonds they need.

Many other bail bondsman in Boone, IA only serve those in their local community. However, the mobile bail bond services provided by A Bail Co. Bill & Travis Rothmeyer allow us to travel anywhere in Boone County and to all other counties in Iowa, extending 24-hour bail bonds to everyone in need. We have a history of working closely with municipal, state, federal, and superior courts and will ensure that you don’t get stuck behind bars. We’ll even give you a ride back home if you need one.

Obtain cash bail bonds and surety bonds in Boone, IA by contacting A Bail Co. Bill & Travis Rothmeyer at 515-274-2245 and asking about our bail bondsman services. 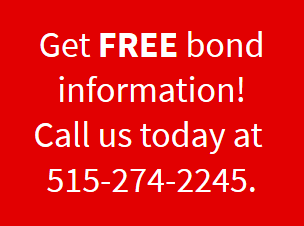